Officially incorporated in 1908, Inglewood is located about 10 minutes east of LAX. In 1920, an earthquake struck the area, attracting many curious people to see the damage. The nice climate convinced many of them to stay which resulted in Inglewood becoming the fastest growing city in the United States throughout the 1920s.

The area has experienced many transformations over the decades. Most recently, this Zip Code has undergone a massive redevelopment project on the former site of the Hollywood Park Racetrack. The 238-acre property is being transformed into a mixed-use neighborhood that will be home to thousands of apartments and townhomes, a luxury hotel, retail and office space, restaurants, open park space, and a casino.

This Audio Tour is Narrated by Alex Alpharaoh
(Bio) 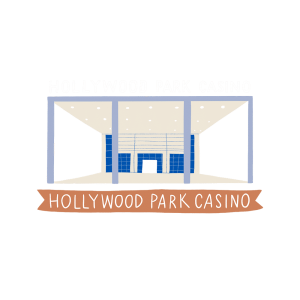 In 1938, Inglewood became home to one of the premier thoroughbred racetracks in the United States. Designed by Arthur Froehlich, who went on to design numerous racetracks around the world, Hollywood Park was a magnet for Hollywood celebrities, and some of the most acclaimed jockeys and famous horses (like Seabiscuit) ran the track during its 75-year existence.

The original complex included the Turf Club, designed by Stiles O. Clements in his signature Streamline Moderne Style (another example of Clement’s use of this style is Jefferson High School, which you can find on our 90011: South Central Los Angeles Tour).

In 1994, the Hollywood Park Casino, which included a poker card room, was added to the Hollywood Park Racetrack complex. After being sold numerous times, and due to declining interest in racing, Hollywood Park was ultimately closed down in 2013. The racetrack was demolished starting in 2014 to make way for a new retail and residential development which includes the SoFi Stadium – home to the Los Angeles Rams and the Los Angeles Chargers – and the current Hollywood Park Casino. Outside the front door of the casino is artist Matt Wedel’s ceramic sculpture, Flower Tree. Splashed with color, this permanent ceramic sculpture contrasts starkly with the black and white pavers at the entrance to the building.

Read above, or listen to learn about Hollywood Park Casino.
Next Stop: 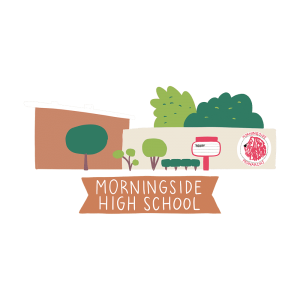 In 1993, Hardwood Dreams, a documentary that was narrated by Wesley Snipes, followed five Morningside High School seniors during their last high school basketball season. Morningside was chosen by director Mike Tollin because of its reputation in basketball, and because it had just won the state basketball title.

All five of the returning starters dreamed of receiving scholarships to the NCAA and eventually joining the NBA. There have been two sequels that reconnected with these five players, sharing updates about what happened to them – one taking place in 2003, and another in 2018.

Other notable alumni of Morningside High School include: WNBA MVP and Olympic gold medal winner Lisa Leslie; actress, comedian and singer Vicki Lawrence; head coach of four NBA teams and a three-time champion as player with the Lakers Byron Scott, among others.

Read above, or listen to learn about Morningside High School.
Next Stop:

We Cupcake specializes in alcohol infused cupcakes that will turn any day into a party. Here at Antaeus we love to celebrate, but don’t worry if boozy beverages aren’t your thing, We Cupcake offers plenty of non-alcoholic treats too.

Read above, or listen to learn about We Cupcake.
Next Stop: 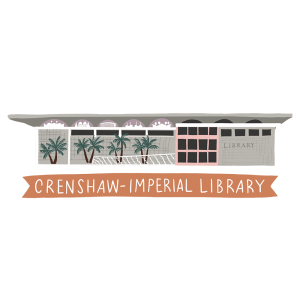 In 1967, architect Charles Luckman (who designed many famous LA buildings, including the Wilshire Federal Building which is part of our 90024: Westwood Tour) built The Forum located at 3900 W Manchester Blvd. Inspired by the Roman Coliseum, Luckman’s circular building was engineered to seat 17,000 people and doesn’t require internal support pillars. The “Fabulous Forum,” as it is lovingly nicknamed, was the former home of the LA Lakers, the LA Sparks, and the LA Kings until the teams all moved to the Staples Center in 1999. After undergoing a major renovation, it reopened in 2014 and serves as a high-end entertainment venue primarily used for concerts, but is also tapped to serve as a site of the 2028 Summer Olympics.

An icon of Los Angeles, Randy’s Donuts features a mid-century drive-up with a giant donut on its roof. It was created in 1953, and has been featured in numerous movies, TV shows, and music videos since then.

On a typical residential street in Inglewood you will find three small residences (one is located at 433 West Ellis Avenue) designed by architect Rudolph Schindler on spec for a developer around 1940. Committed to affordable housing, Schindler used inexpensive materials including plywood for outside walls and built-in furniture. These “modern gems” are lovingly maintained by their current owners. You can check out another example of Schindler’s work, his personal residence, on our 90069: West Hollywood Tour.

Read above, or listen to learn about Crenshaw-Imperial Library.
Next Stop: 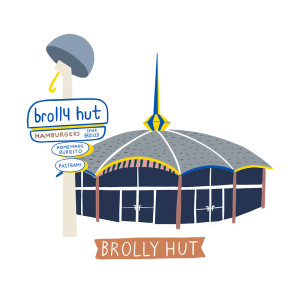 Designed by Victor Miller and opened in 1968 as the Bumbershoot Café, the Brolly Hut is an example of programmatic architecture, with the roof being shaped like an umbrella – or the eatery’s British namesake “brolly.”

The hamburger stand features expansive glass windows, bold colors, tiled interior, and even umbrella light fixtures. Be sure to also check out the street sign, which features an arm extended out of a hamburger holding a tilted umbrella, on your way to the restaurant.

Read above, or listen to learn about Brolly Hut.