Though only traces remain today, in the first half of the twentieth century the South Central neighborhood of Los Angeles was the epicenter of Jazz culture on the West Coast. It was even known as “the West Coast Harlem” at its height.

This Audio Tour is Narrated by Karen Malina White
(Bio)

Do you have a late night sweet tooth? We recommend Gabo Crepes! Owned and operated by Gabriela Rodriguez and her team, Gabo Crepes is open 5:30pm to 10:30pm Friday through Sunday and is our top choice for getting your crepe fill in Los Angeles!

Read above, or listen to learn about Gabo Crepes.
Next Stop: 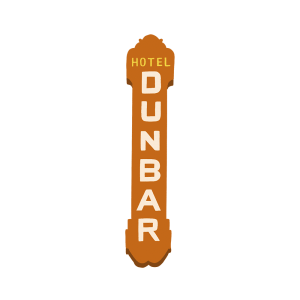 “In its heyday, the Dunbar Hotel was known as a West Coast mixture of Waldorf-Astoria and the Cotton Club” – Los Angeles Times

The Dunbar Hotel you are seeing today has been revived after declining in the 1960s when legal and social victories of the Civil Rights movement offered new options for lodging and performance venues across the city for African Americans. But, in the 1930s to 1950s the Dunbar was known as “the hub of Los Angeles Black culture”.

In 1928, John Somerville, the first Black graduate from USC School of Dentistry, and Vada Watson Somerville, the first licensed Black woman dentist in the state of California, bought a corner lot at 42nd and Central. The Somervilles built a four-story luxury hotel for $250,000, and hired only Black contractors, laborers, and craftsmen. Originally named Hotel Somerville, it was one of the most upscale Black hotels in the United States and hosted the first national convention of the NAACP to be held in the western United States in 1928. Unfortunately, the stock market crash of 1929 led to the Somervilles selling the building. The new owner renamed it the Dunbar Hotel, after famed Black poet Paul Laurence Dunbar. In 1931, a nightclub opened at the Dunbar, and it became the center of the Central Avenue jazz scene becoming a celebrity magnet for Black entertainers including Ella Fitzgerald, Cab Calloway, Louis Armstrong, Duke Ellington, Billie Holiday, Fats Waller, Nat King Cole, Lena Horne, Billy Eckstine, Jelly Roll Morton, Ray Charles, Count Basie, and Duke Ellington.

Read above, or listen to learn about Dunbar Hotel.
Next Stop: 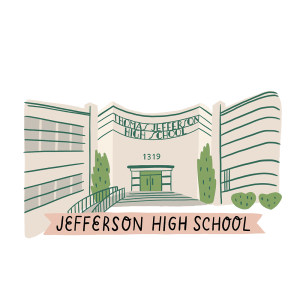 In 1915, the citizens of Los Angeles voted to sell $4.6 million in bonds to raise money to build schools in Los Angeles, with approximately $500,000 going towards building Jefferson High School. The school was founded in 1916 and is the fourth oldest high school in the Los Angeles Unified School District.

Unfortunately, in 1933 a magnitude 6.4 earthquake in Long Beach destroyed the campus. Architect Stiles O. Clements was hired to build a 45-unit campus which was completed in 1935.

Some notable Jefferson High School alumni include Ralph Bunche (the first African American to be honored with a Nobel Peace Prize in 1950), Woody Strode (one of the first Black players in the NFL), Alvin Ailey (choreographer and activist), and Samuel R. Browne. In 1936, Browne became the first African American music teacher in the Los Angeles public school system, teaching at Jefferson High School. Over his 25-year tenure at the school he became a major influence on the up-and-coming jazz musicians of Los Angeles, and Jefferson High School maintained a continuous stream of new artists into the Central Ave jazz scene, keeping it fresh and thriving. He created a robust music curriculum that included music theory, music appreciation, harmony, counterpoint, orchestra, band, and choir. He would often bring students to Central Avenue to hear the musicians play, and sometimes even brought performers like Jimmie Lunceford or Nat King Cole into his classroom.

Read above, or listen to learn about Jefferson High School.
Next Stop: 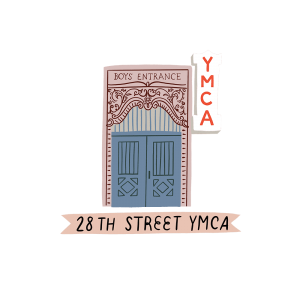 The 28th Street YMCA, one of only two remaining club buildings founded by and for African Americans in Los Angeles was a major milestone for recreational life on Central Avenue. This four-story structure was designed by well-known architect Paul R. Williams, who was the first African American member of the American Institute of Architects.

He designed homes for celebrities including Frank Sinatra, Lucille Ball and Desi Arnaz, Bill “Bojangles” Robinson, and Barbara Stanwyck, among others, as well as many buildings in Los Angeles. Side note: He also designed the wrought iron gate for Murphy Ranch which is featured in our 90272: Pacific Palisades audio play.

Built in 1926, the Spanish Colonial Revival Style building cost $200,000 and included a gymnasium, meeting spaces, 52 dormitory rooms, and a swimming pool, which was an important feature since swimming pools were racially segregated in Los Angeles until 1931. Be sure to check out the two identical entrances which are engraved with Men’s Entrance and Boy’s Entrance panels above the doors. In 2009, the building was added to the National Park Service’s National Register of Historic Places.

Read above, or listen to learn about 28th Street YMCA.
Next Stop:

The 27th Street Bakery is a third-generation family-owned business founded by Harry and Sadie Patterson in the 1930s. The Pattersons moved to Los Angeles from Shreveport, Louisiana and opened a restaurant that catered to other African Americans who also came from the South.

In 1956, the restaurant was converted to a specialty bakery – now the largest manufacturer of Sweet Potato Pies on the West Coast. Fun fact: One of the current owners, Jeanette Bolden, won a gold medal in the 4×100 meter relay in the 1984 Summer Olympics in Los Angeles, and went on to be the head coach of the U.S. women’s track and field team for the 2008 Beijing Olympics.

Read above, or listen to learn about 27th Street Bakery.
Next Stop: 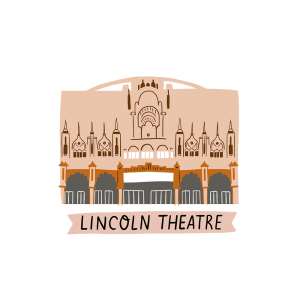 In the 1910s and 1920s, large movie theatres were opened in Downtown Los Angeles in the Broadway Theatre District. However, these theatres either excluded African Americans or restricted them to “colored only” seating sections. As a result, theaters that granted equal access to African Americans were one of the many businesses developed along Central Avenue.

For more than 30 years, the Lincoln hosted a variety of stage shows, plays, concerts, talent shows, vaudeville, and motion pictures, including live performances. It was often referred to as “The West Coast Apollo” because it featured many of the same acts as the Apollo Theater in Harlem. It was outside the Lincoln Theatre in the late 1940s that eden ahbez handed the song “Nature Boy” to Nat King Cole’s valet, which reached the top of the Billboard musical charts and helped establish Cole’s solo career.

In 1962, the Lincoln Theatre was converted to a church and today it continues to be used for religious services.

Read above, or listen to learn about Lincoln Theatre.