Westwood was developed on land called Wolfskill Ranch owned by Arthur Letts, founder of the Broadway and the Bullock’s department stores. Letts left the land to his son-in-law, Harold Janss, who through the Janss Investment Company started developing the area and building residences. In addition to Westwood, Harold and his brother Edwin Janss Sr. also developed Van Nuys and Canoga Park. Upon developing the land, the brothers lobbied the city of Los Angeles to choose the area for the new campus of the University of California, Southern Branch, now known as UCLA. The first undergraduate classes were held on the new campus in 1929 with 5,500 students.

This Audio Tour is Narrated by Armin Shimerman
(Bio) 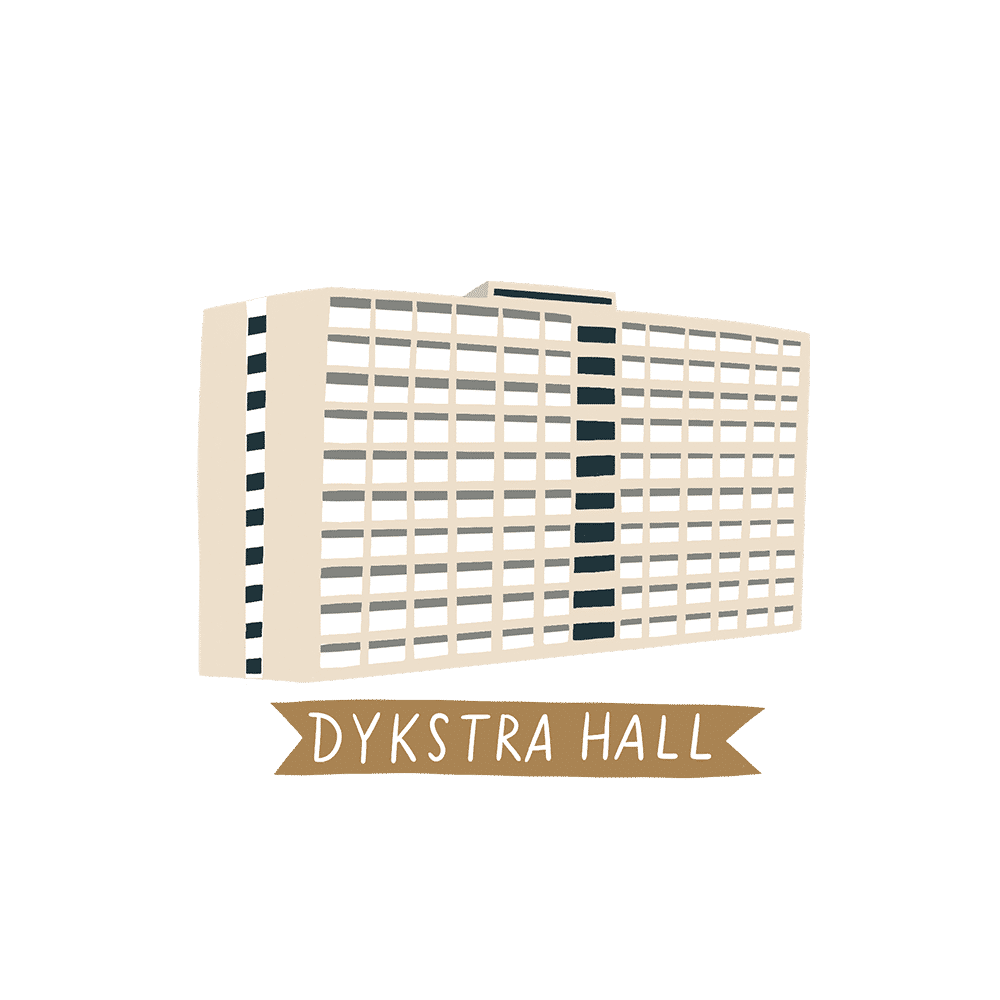 As one of the nation’s largest universities today, UCLA received its own zip code (90095) starting in 1995. Many of its original buildings like Royce Hall, Haines Hall, and Powell Library are located in this new zip code.

Read above, or listen to learn about Dykstra Hall.
Next Stop: 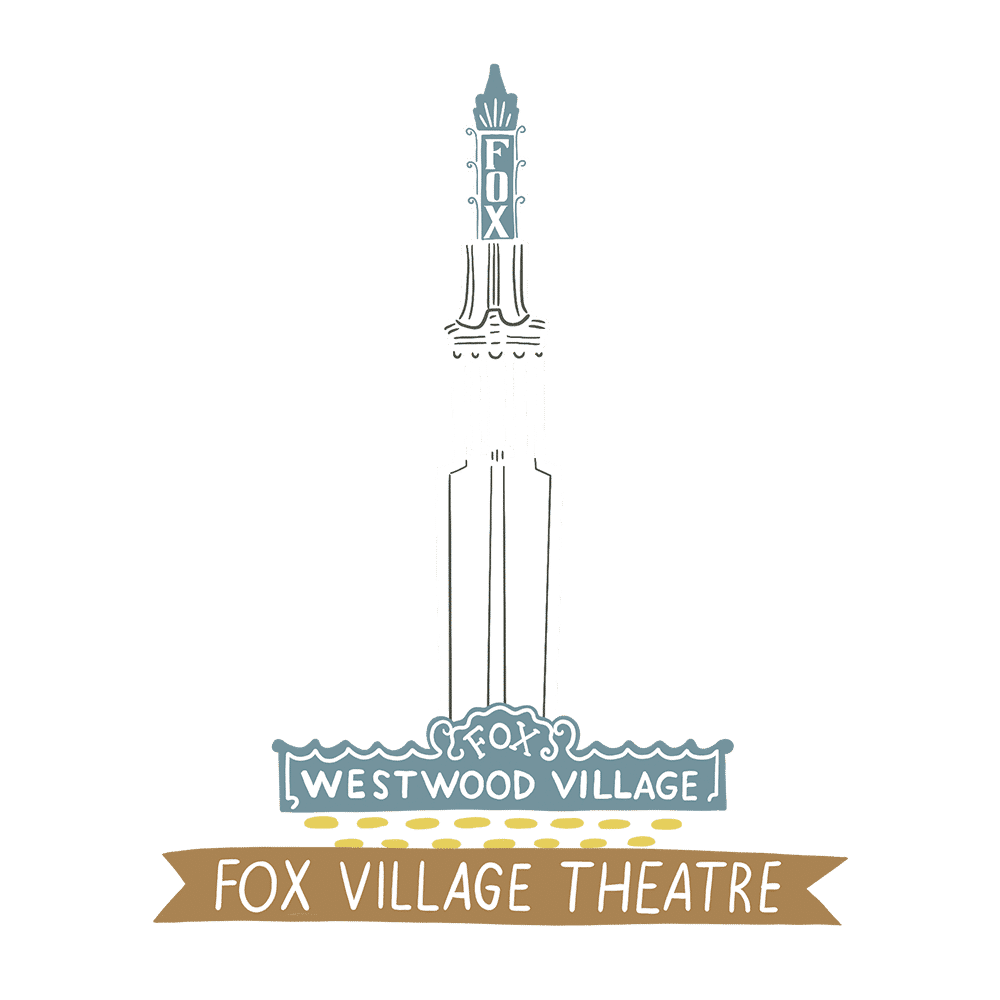 In 1929, Westwood Village opened, and at the time was only the second shopping district of its size in the U.S. It was considered one of the nation’s best planned and most beautiful commercial districts, and opened with 34 businesses that the Janss brothers had attracted to this new development.

Ten years later, despite the effects of the Great Depression, the area boasted 452 businesses. The Fox Theatre (known today as the Regency Village Theatre) opened in August of 1931.

Designed by architect Percy Parke Lewis, the Fox seats 1,400 people. It quickly became the most recognizable landmark in Westwood Village thanks to its iconic 170-foot white Art Deco tower. It also became famous for the many Hollywood movie premieres that have been held here including A Star is Born, Independence Day, Shrek, and hundreds of others. If you are taking the tour at night you can even see the stunning tower and its signs illuminated.

Read above, or listen to learn about Fox Village Theatre.
Next Stop:

We think Broxton Brewery is a cool spot to check out for several reasons. For one thing, they are located in the oldest building in Westwood Village, Janss Dome! We suggest ordering one of their beers that are brewed in-house and enjoying it on their patio. Not a patio person? No sweat! You can also order a bite to eat and a beer online and pick it up at a time of your choosing.

Read above, or listen to learn about Broxton Brewery & Public House.
Next Stop:

Since most of us are spending more time at home, why not pick up a new hobby like sending letters to friends or journaling. You can find all the stationary supplies you need at Flax Pen to Paper! We recommend picking up a nice pen or a pretty notepad for that person on your holiday list that’s just impossible to shop for.

Read above, or listen to learn about Flax Pen to Paper.
Next Stop: 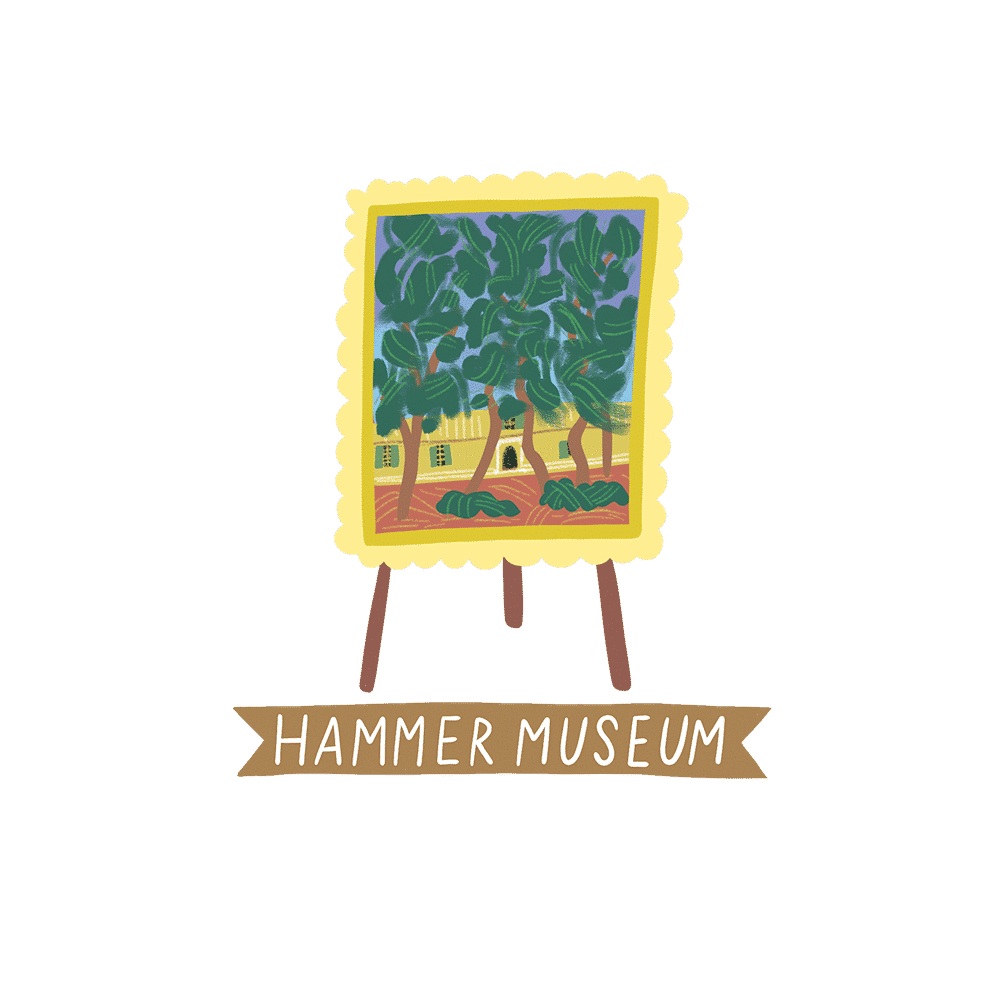 Designed by architect Edward Larrabee Barnes, The Hammer Museum was founded in 1990 to house the personal collection of Dr. Armand Hammer, a physician turned entrepreneur who also became the Chairman of Occidental Petroleum Corporation. Oxy, as it’s called, was responsible for financing the museum’s construction estimated at $96 million.

Even though you can’t go inside, we recommended stopping by the Hammer Museum. Hammer was an avid art collector throughout his life, with his art collection including works by Paul Cézanne, Edgar Degas, Paul Gauguin, Édouard Manet, Claude Monet, Mary Cassatt , John Singer Sargent, and Vincent Van Gogh, among others. Unfortunately, Dr. Hammer passed away only three weeks after the museum was opened. He’s buried at nearby Westwood Village Memorial Park – the next stop on our tour.

In 1992, the museum started negotiations with nearby UCLA, and in 1994 a partnership was finalized. In 1994, the museum made headlines for the sale of Leonardo de Vinci’s Codex Leicester to Bill Gates for $30.8 million. The Codex Leicester, a 72-page notebook of scientific musings and sketches, was one of Dr. Hammer’s proudest acquisitions, he even tried to rename it the Codex Hammer at one point.

The museum has received critical acclaim for its exhibitions featuring overlooked as well as emerging contemporary artists. Annually, it hosts over 300 programs including lectures, readings, concerts, film screenings, and other events at no cost to the public. The LA Times Magazine called the Hammer “the hippest and most culturally relevant institution in town.” That’s why we think you should add this to your post-COVID list of things to do!

Read above, or listen to learn about Hammer Museum.
Next Stop: 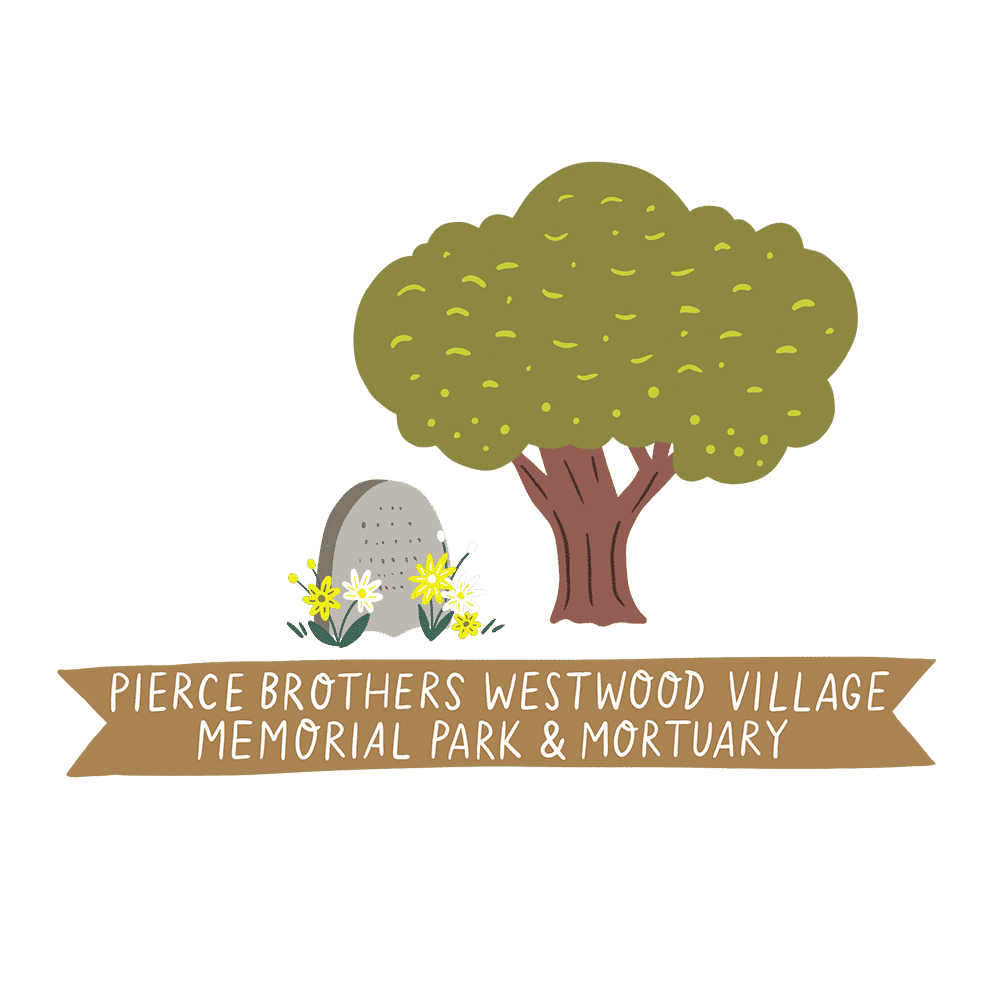 It serves as the final resting place for many celebrities including Marilyn Monroe, Natalie Wood, Eva and Zsa Zsa Gabor, Minnie Riperton, Truman Capote, Dean Martin, and too many others to name. In 1976, vandals tried to remove the plaque on Monroe’s tomb, so to prevent similar issues some gravesites are even unmarked. This cemetery is still active and used for funeral services so please be respectful as you explore the 2.5 acres.

The Pierce Brothers, William and Fred, might have been considered celebrities in their own right. In the 1880s, they opened a livery stable at Alameda and 16th Street. With the city’s population growing, they soon expanded into the mortuary business transporting bodies from homes to the cemetery. In 1924, the brothers built the first full service funeral home in the city at 720 W. Washington Blvd. In 1933, with the help of their brother Clarence, who was the founder of Pierce College in Woodland Hills, the brothers tried a new marketing tactic which included offering church group tours to calm people’s fears about the modern death industry. The brothers eventually enlisted eight siblings to serve in different roles within their company – that’s a family business!

Read above, or listen to learn about Pierce Brothers Westwood Village Memorial Park & Mortuary.
Next Stop: 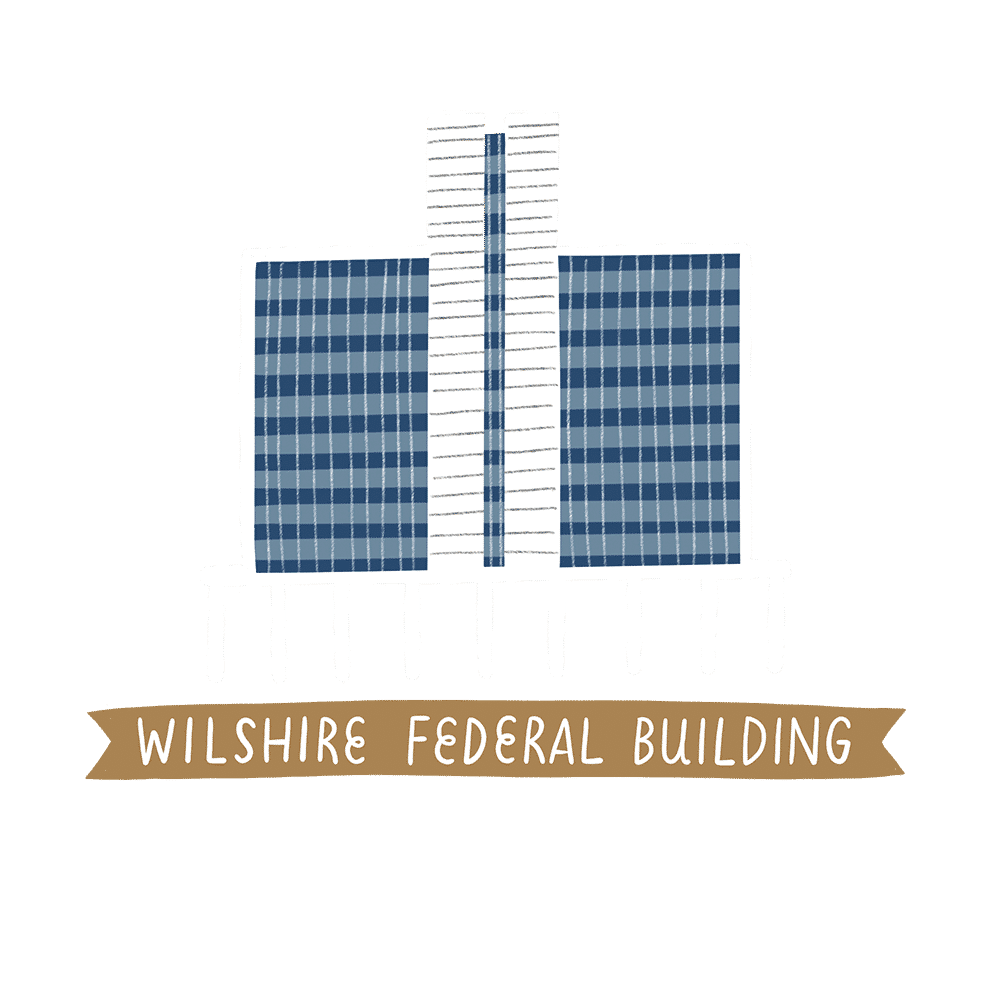 The Los Angeles offices of the FBI, IRS and other major federal agencies are located at the nearby Wilshire Federal Building. The 17-story building, designed by Charles Luckman Associates, was completed in 1969 on a former golf course.

The building is designed in a Late Modernism style and includes a pure white façade. For many years public service announcements were projected on the side of the building encouraging passersby to do anything from purchase savings bonds, to encouraging them to lock their car doors to prevent theft. Among the Cold War-era features of the buildings are designated areas that can provide safe shelter for up to 13,000 people.

Over the years it has been a popular site for protests during times of heightened political activity. Vietnam War demonstrators, pro- and anti-Shah Iranians, parents opposed to toy guns, Occupy Wall Street activists, and just about every kind of political group imaginable has demonstrated at the Federal Building. In July, it was the site of a large Black Lives Matter protest expressing solidarity with Portland protestors who were struggling with intervention by federal officers. The Federal Building is often chosen not only for being a symbol of the federal government, but because its location and proximity to a large number of commuters gives protestors heightened visibility.

Read above, or listen to learn about Wilshire Federal Building.

Thank you for exploring Los Angeles with Antaeus! We hope you’ll listen to all six of The Zip Code Plays, and join us for more tours of local neighborhoods.

< Learn about The Zip Code Plays