It’s hard to believe, but West Hollywood was once known for its ranches and farmlands. The first major development took place in the last few years of the nineteenth century when the town of Sherman, established by Moses Sherman and his partners at the Los Angeles Pacific Railroad, became the site of railroad yards and car barns. This streetcar line would eventually become part of the Pacific Electric Railway – the largest electric railway system in the world in the 1920s.

For many decades, West Hollywood remained unincorporated, but thanks to a coalition of residents who wanted to maintain rent control, the City of West Hollywood was officially incorporated in 1984. Today, it is home to over 36,000 residents – 40% of which identify as LGBTQ. Thanks to its active nightlife on Sunset Boulevard and Santa Monica Boulevard, West Hollywood attracts about 60,000 additional people to the 90069 Zip Code on a normal weekend.

This Audio Tour is Narrated by Abby Wilde
(Bio) 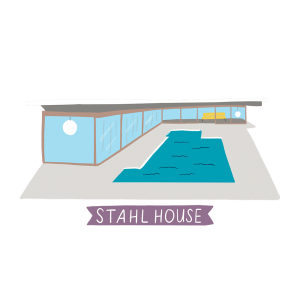 Constructed on a dramatic site with breathtaking views of Los Angeles, the Stahl House is considered an iconic representation of mid-century modern architecture. In 1954, C.H. “Buck” and Carlotta Stahl purchased a small lot above Sunset Boulevard with the vision of building their dream home. In 1957, they shared a three dimensional model that was designed by Buck with architect Pierre Koenig (who also built Case Study House No. 21, the Bailey House in nearby 90046). Koenig was hired to design their home and construction began in 1959.

The Stahl House was made famous by a photograph taken by Julius Shulman, which featured two women in cocktail dresses inside the house, perched above the twinkling lights of the city. In 2007, the American Institute of Architects listed it as one of the top 150 structures on their “America’s Favorite Architecture” list. Be sure to make a reservation as access to the house is by appointment only.

Read above, or listen to learn about Stahl House.
Next Stop: 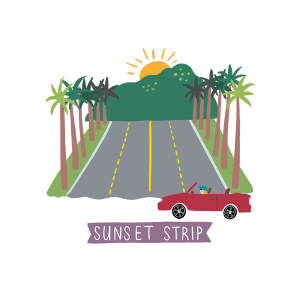 Today, the Sunset Strip (sometimes just called The Strip) is a 1.5 mile stretch of Sunset Boulevard that runs through West Hollywood. Once a major connection between El Pueblo de Los Angeles and the ranches to the west, the Sunset Strip became popular in the 1920s because West Hollywood was an unincorporated part of the city that fell outside the jurisdiction of the LAPD. For this reason during Prohibition, the area saw the proliferation of illegal clubs, casinos, and speakeasies – especially popular with Hollywood elites – such as the famous Clover Club, which housed hidden gambling rooms, and the Café La Boheme, an LGBTQ-friendly club that opened in 1927.

By the 1960s, the Strip became the epicenter for famous musicians playing at clubs like the Whisky a Go Go, the Roxy, Pandora’s Box, and the London Fog. Around that time, these clubs were also targeted for noise complaints by residents, and a 10 p.m. curfew was put into place. This finally erupted in a clash between police and young club patrons in 1966, which became known as the Sunset Strip curfew riots.

Today, the Sunset Strip is known for its rock clubs, nightclubs, billboard advertisements, boutiques, and restaurants, including over 50 businesses at Sunset Plaza, which was the first commercial development built along the Strip in 1924.

Read above, or listen to learn about Sunset Strip.
Next Stop:

Located on the Sunset Strip, you will find the independent bookstore Book Soup, which was founded in 1975 and today houses over 60,000 titles. Known for its floor-to-ceiling bookshelves, high-profile author readings, limited-edition books, vinyl records, and celebrity clientele, Book Soup is an essential stop on any tour of LA. Look out for the two golden dogs and you’ll know you’ve found the right place!

Read above, or listen to learn about Book Soup .
Next Stop:

At Hugo’s Restaurant, they’re committed to creating a sense of community through tasty meals made from scratch. Clearly their efforts have proved fruitful as they’ve been in Los Angeles for over 40 years! They serve breakfast, lunch, and dinner – so you can stop by at any time.

Read above, or listen to learn about Hugo’s Restaurant.
Next Stop: 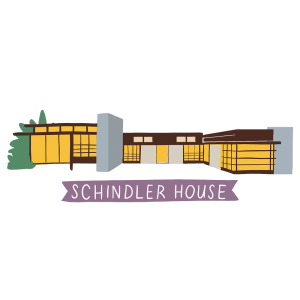 The design included a private studio for each of the four original residents (Rudolph & Pauline Schindler and Clyde & Marian Chace), an entrance hall, an enclosed patio, a bathroom for each couple, two open terraces on the roof for sleeping, a utility room that included a communal kitchen, and a guest apartment. With Schindler as architect and Chace as builder to save costs, construction began in November 1921 and was completed in May 1922 for a total cost of $12,550.

The Chaces and Schindlers shared the house from 1922 to 1924 when the Chaces moved to Florida. Pauline Schindler left the house and her husband in 1927, but eventually moved back into the Chace apartment in 1930 until her death in 1977. Rudolph remained in the house until his death in 1953. You can visit more examples of Rudolph Schindler’s architecture on our 90303: Inglewood Tour.

Read above, or listen to learn about Schindler House.
Next Stop: 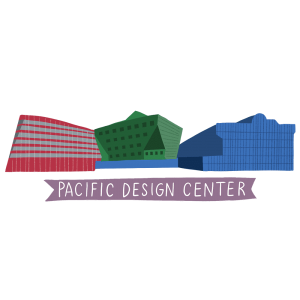 The Pacific Design Center is a 14-acre campus that opened in 1975 with the 750,000-square-foot building, Center Blue. This building is also sometimes called the Blue Whale and was designed by architect César Pelli while he was a partner at Gruen Associates. Center Green was opened in 1988, adding 450,000 sq. ft. to the Pacific Design Center. With an additional 400,000 sq. ft. the final phase, Center Red, opened in 2013. The Center has 100 showrooms which display and sell 2,200 interior product lines to professional interior designers, architects, facility managers, decorators and dealers. It also hosts screenings, exhibitions, lectures, meetings, special events, and receptions for the design, entertainment, and art communities.

While not formally credited as one of the designers, architect Norma Merrick Sklarek also contributed to the architectural design of the Pacific Design Center. Like many women architects in corporate firms at the time, for most of her career Sklarek served as a project manager rather than design architect, so she wasn’t credited for her design work on Pacific Design Center. Sklarek is known for being one of the first African American women architects in the United States and the first Black woman to become a member of the American Institute of Architects in 1959. In 1985, she co-founded Siegel Sklarek Diamond, which at the time was the largest woman-owned architectural firm in the US, and made Sklarek the first African American woman to co-own an architectural practice. She left that practice four years later because the firm was not able to secure commissions for the large-scale projects that she enjoyed working on. She then joined the Jerde Partnership, where she helped design buildings like the Mall of America in Minneapolis. After a lifetime of extraordinary accomplishments, Sklarek passed away at her home in Pacific Palisades in 2012.

Read above, or listen to learn about Pacific Design Center.
Next Stop: 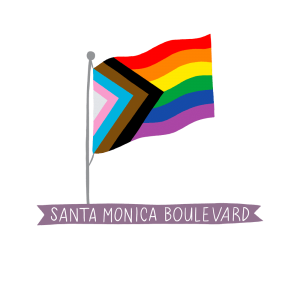 The stretch of Santa Monica Boulevard that runs through West Hollywood is at the heart of Los Angeles’s LGBTQ community and nightlife. It is home to the Boystown bars and clubs, the annual Halloween Carnaval – one of the largest Halloween gatherings in North America, and the LA Pride Festival and Parade – the second largest Pride celebration in the country. We suggest starting your walking tour at the Rainbow Crosswalk at the corner of San Vicente and Santa Monica Boulevards.

Read above, or listen to learn about Santa Monica Boulevard.