Santa Monica was launched by two entrepreneurs: mining industrialist Colonel Robert Symington Baker, and silver mine owner and Nevada Senator John Percival Jones. They founded the city in 1875, plotted the layout, and donated some of the land for public use (the 26-acre plot that now makes up Palisades Park was donated by Jones). The city was incorporated in 1886, and the first commercial buildings appeared on Second Street in the 1880s and spread to Third Street in the 1890s. The naming of the city is connected to the Kuruvungna Springs, a sacred site for the native Gabrieleno Tongva people, that still survives today beneath a 150-year-old Mexican Cypress on the campus of University High School. Father Juan Crespí, a Franciscan missionary who catalogued Junípero Serra’s exploration of California (Serra is one of the characters featured in our 90012: DTLA – Clara and Serra and The Talking Bear play). Serra had remarked that the springs reminded him of Saint Monica’s tears for her wayward son Augustin. This story inspired Baker and Jones in choosing the city’s name. The zip code of 90403 is almost entirely a residential area of Santa Monica.

This Audio Tour is Narrated by Liza Seneca
(Bio) Owners Aziz and Louise Farnam spent 14 years decorating the exterior and interior of their house with mosaic tiles creating glossy, glittering surfaces, and a kaleidoscopic mixture of colors. Look for hidden details in the design including the Hollywood sign in the alley, a chicken on the roof, a fishy corner, and Aziz’s signature tiled on a sidewall.

Farnam House has become famous both to residents and beyond; the house won a TLC contest for interesting houses in California in 2013. There are rumors that it has at times been unpopular with neighbors, but it has also become a community staple with others. One thing is for sure, it’s a distinctive landmark of 90403 that you won’t want to miss seeing.

Read above, or listen to learn about Farnam House.
Next Stop: 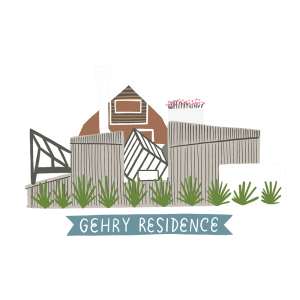 The 22nd Street home was originally an extension of an old Dutch Colonial home that Frank Gehry had bought in 1977. He used unconventional materials, such as chain-link fences and corrugated steel, to build outward from the original house and create a sort of enclosure.

Some architects today consider the Gehry Residence to be one of the first Deconstructivist designs — a label that Gehry himself denies — because of its somewhat transparent nature.

Gehry stripped parts of the house to reveal the framing, exposing joists and wood studs, and rather than meld one cohesive design, he drew attention to the new and old elements of the house, and sought to distinguish them from one another. He further renovated it in 1991 to meet the needs of a growing family, and in 2019 moved his family to a larger complex he had designed on Adelaide Street, also in Santa Monica.

Allegedly the house has been quite unpopular with neighbors, but that hasn’t changed the fact that the house attracts amateur appreciators and fellow architects to appreciate the facade as a fusion of a modern art piece and functional architecture. You can also check out another building designed by Frank Gehry if you take our 90012: Downtown Los Angeles tour.

Read above, or listen to learn about Gehry Residence.
Next Stop:

We love Limonaia, run by Los Angeles native, Jessica Goldfarb, for its unique selection of gifts and home decor. How cool is it that Jessica has visited 6 out of the 7 continents and has chosen products inspired by her international travels, allowing us to experience goods from around the world without having to board a plane!

Read above, or listen to learn about Limonaia.
Next Stop: 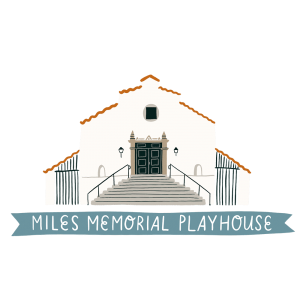 The Miles Memorial Playhouse, located in Christine Emerson Reed Park, was gifted to the city by civic leader J. Euclid Miles dedicated to his daughter Mary. Born in Ohio in 1851, Miles moved to Santa Monica where he became active in civic affairs, including being elected as a city council member and helping with the redevelopment of Santa Monica as a partner in his investment firm Miles & Tegner.

Fun fact: Christine Emerson Reed Park was renamed after the former mayor and city councilwoman in 1998, but was originally called Lincoln Park. This is where the band Linkin Park got the inspiration for its name, but had to change “Lincoln” to “Linkin” in order to secure a website for the band.

The Miles Memorial Playhouse is dedicated to the young men and women of Santa Monica, and has been a source of entertainment to the community since 1929. The building was designed by noted architect John Byers, who designed many celebrity homes in Los Angeles, and was noted for his use of the Spanish Colonial Revival style. That style is evident in the design of the Playhouse by its white stucco exterior, red-tiled roof, heavy studded wooden doors, and wrought iron details. In 1994, the Playhouse sustained major damage from the Northridge earthquake, but was fully restored by 1998, and continues to serve its original purpose of serving its community.

Read above, or listen to learn about Miles Memorial Playhouse.
Next Stop:

One of our favorite places to get a caffeine fix is at Demitasse cafe! With every barista having their own signature drink and beans roasted in-house, there is no way you can go wrong. We love that Demitasse is committed to reducing waste and buying local ingredients, so you can drink that cup of Joe guilt free! You can also catch them on our 90012: Downtown Los Angeles tour.

Read above, or listen to learn about Demitasse.
Next Stop: 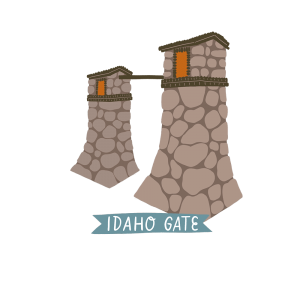 Batchelder is known for creating hand-crafted art tiles, which by the 1920s could be found in homes and buildings across the United States, paving the way for him being a leader in the American Arts and Crafts Movement. The tiles on the Idaho Gate feature grape leaf motifs that were popular in Craftsman-era designs. The original architects of the gates are unknown, but renowned architects and brothers Charles Sumner Greene and Henry Mather Greene have been put forth as candidates.

Read above, or listen to learn about Idaho Gate.