Pacific Palisades has been poetically described as “Where the Mountains Meet the Sea,” which is an appropriate epithet for one of L.A.’s most beautiful natural areas. One of the first major developments in the Palisades was the site of the “Long Wharf”, also known as the Port of Los Angeles or the Mile Long Pier, built in 1893. It was the longest wharf in the world and became both a tourist attraction and an important part of development in Southern California, with its main import being lumber. However, it fell into decline after 1912 when the Port of Los Angeles was established near Long Beach, and was ultimately removed by 1933.

The area drew further attention when filmmaker Thomas Ince, known as the “father of the Western,” built a massive movie studio known as Inceville in 1911. However, a series of fires destroyed much of the complex and the opening of his studio company in Culver City led Ince to sell the property. In 1922, the land was bought by Reverend Charles H. Scott of the Southern California Methodist Episcopal Church, who envisioned the area as a spiritual and intellectual commune for his parishioners. They came up with the name Pacific Palisades. By 1929 the Palisades was an established town; the paving of Sunset Boulevard in 1925 and the opening of the Riviera Country Club in 1927 drew visitors and residents to the area. The completion of the Roosevelt Highway (now known as the PCH) in 1929 connected the region to larger cities.

This Audio Tour is Narrated by Kwana Martinez
(Bio) 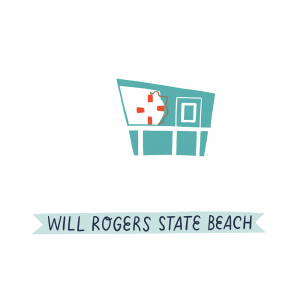 The beautiful Will Rogers State Beach stretches along the length of the Palisades and attracts beachgoers looking to escape the crowds of Santa Monica and Malibu. The Pacific Coast Highway is also a common recreational drive for those who want to take in the gorgeous coastline and breathe in that ocean air.

William Penn Adair Rogers was born in 1879 to a Cherokee family, and was the youngest of eight children. He rose to fame as a stage actor, vaudeville performer in the Ziegfeld Follies, cowboy, humorist, newspaper columnist, and social commentator. He was also the highest paid actor in Hollywood in the 1930s. Over his lifetime, he traveled around the world three times, made 71 films, and wrote more than 4,000 nationally syndicated newspaper columns.

Following his film career taking off and a three-year contract with Samuel Goldwyn, Rogers bought a ranch in Pacific Palisades. An advocate for the aviation industry, Rogers unfortunately died in a plane crash in 1935 in northern Alaska. His widow, Betty, left his property in Pacific Palisades to the state of California in 1944 upon her death.

Fun fact: The beach at Will Rogers State Beach was the original set for Baywatch, before the show relocated to Hawaii.

Read above, or listen to learn about Will Rogers State Beach.
Next Stop: 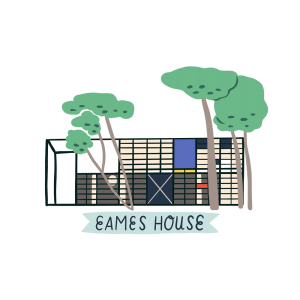 A landmark of Mid-Century Modern architecture, the Eames House was constructed in 1949 by husband-and-wife, Charles and Ray Eames who are also well-known for their furniture design.

Unfortunately, because of COVID-19 this stop is currently closed to the public, but we still think it deserves a spot on this list.

Also known as Case Study House No. 8, the house was commissioned by Arts & Architecture magazine as a challenge to develop progressive, but modest homes in Southern California. The magazine ran the program between 1945 through 1966, and commissioned a total of 36 houses designed by major architects of the day, with only 25 of the homes being built.

The Eames House consists of two adjacent buildings – which functioned as Charles and Ray’s home and a studio – separated by a small patio. The two glass and steel rectangular boxes are nestled into the hillside, and backed by a large concrete retaining wall. The facade has a geometric pattern that includes brightly-colored and neutral-colored panels. The Eameses lived in the house until their deaths, and it now operates as The Eames Foundation, which attracts 20,000 visitors a year. We highly recommend that you put making a reservation to visit on your list of things to do when it reopens!

Read above, or listen to learn about Eames House.
Next Stop:

Here at Antaeus, our passion for crafting can be seen in some of the amazing costumes we’ve had on our stage. Want to try your own hand at making show-stopping fashion? We recommend ordering your supplies online from The Sew Chateau and picking them up the same day or next day at their storefront. We’re personally obsessed with their child-friendly kits that come with everything you’ll need to make masks, scrunchies, skirts, and more!

Read above, or listen to learn about The Sew Chateau.
Next Stop:

Whether you are in a rush, looking for an outside spot to sit and chill, or just want to enjoy a bite to eat from the comfort of your own couch, we recommend Estate Coffee as the place for you! We think their coffees are simply delicious, not to mention, how tasty their salads and sandwiches are! Drop in, pick-up, or order delivery.

Read above, or listen to learn about Estate Coffee.
Next Stop: 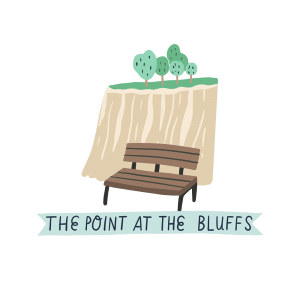 The Point at the Bluffs/Palisades Bluffs Park

This is the spot to go in Pacific Palisades for a bird’s-eye-view of the stunning coastline. This small park boasts amazing views of Santa Monica, PCH, and Malibu. We recommend you sit on one of the benches at The Point at the Bluffs and take in a sunset over the Pacific Ocean if you have the time.

Read above, or listen to learn about The Point at the Bluffs/Palisades Bluffs Park.
Next Stop: 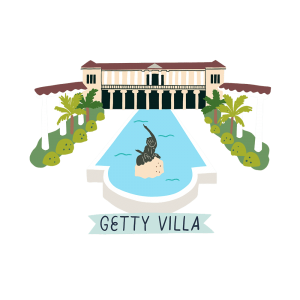 Oil tycoon J. Paul Getty was an avid collector of art and antiquities. After running out of room in a gallery adjacent to his home, he started construction on the Getty Villa to house his extensive collection of Roman, Greek, and Etruscan art.

This spot is currently closed due to COVID-19, but we couldn’t pass it up.

Designed by Robert E. Langdon Jr. and Ernest C. Wilson Jr. in consultation with archeologist Norman Neuerburg, the Getty Villa was planned as a near replica of the Villa dei Papiri, a luxurious Roman residence in Herculaneum, Italy that had been buried by the eruption of Mount Vesuvius in 79 A.D. Following Getty’s death in 1976, the museum received $661 million from his estate and began planning its much larger building, the Getty Center, in Brentwood. The museum decided to split the 44,000-piece art collection between the two locations.

Among the collection at the Getty Villa is Victorious Youth, one of a few remaining life-sized Greek bronze statues; The Lansdowne Heracles, a Roman marble sculpture of about 125 CE (Fun fact: Our theater company is named after Antaeus, and Heracles plays an important role in our namesake’s story!); the Getty kouros, scientific analysis is inconclusive about whether this statue was from Greek times, but if it is then it’s one of only twelve remaining intact life-size kouroi; and The Marbury Hall Zeus, a marble statue that was recovered from ruins at Tivoli near Rome.

The Getty Villa also hosts live performances in both its indoor auditorium and its outdoor theater. There are four different gardens on the grounds, featuring plants known to have been cultivated by the ancient Romans. Two of the gardens feature long pools that serve as centerpieces for the gardens and are surrounded by bronze statues. For this reason, The Getty Villa is adored by tourists not only for its art collection, but also for its stunning Romanesque architecture.

Read above, or listen to learn about The Getty Villa.
Next Stop: 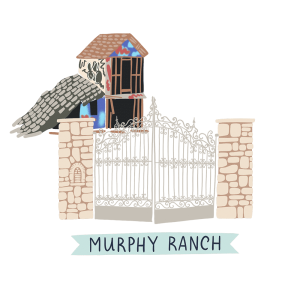 Sullivan Fire Rd Pacific Palisades, CA 90272 (near the Rustic Canyon Trail and on the Rustic Creek)

Making a home in the Palisades was the mysterious “Herr Schmidt,” who to this day has never been certainly identified. Rumors began quietly circulating of a small following of mostly wealthy socialites who had become enraptured by Schmidt’s “mystical powers” and his foretelling of Nazi Germany’s conquest of the United States.

One of the few remaining traces of this bizarre and mysterious chapter of Palisades history is Murphy Ranch, a series of ruins in the heart of Rustic Canyon that was apparently built to serve as a Nazi compound.

Chicago socialites and sympathizers of the fascist Silver Legion of America, Norman and Winona Stephens allegedly bought the land in 1933 under the pseudonym “Jessie M. Murphy” and, under the influence of Herr Schmidt, began to build “a self-sufficient farm based on National Socialist ideals.” Architectural drawings from 1934 to 1941 reveal a grand design that less resembled a farm than a grand palace. The compound had its own water supply, a 2,000 gallon oil tank, a double-generator power station, an irrigation system for terraces of plants, and a cold storage locker for food. The plans for the unfinished mansion included four stories, an indoor pool, a grand central hall, multiple libraries and social rooms, a large master bedroom and a number of bedroom suites of various sizes, a four-car garage, extensive patios and balconies, and a music room. By the late 1930s only a few of the buildings had been constructed, and very little progress had been made on the mansion. In 1939, the couple hired renowned local architect Paul R. Williams (also featured on our 90011: South Central L.A. tour) to design the mansion, and construction was completed on the front gates. Plans stopped in 1941 when the United States entered the war.

A newspaper article in the Los Angeles Times entitled “Trouble for Traitors” vaguely hinted at the existence of Schmidt and a Nazi following in Santa Monica, and warned that traitors to the United States would be rounded up by the government. Though no concrete proof of his existence exists, rumors say that Herr Schmidt was arrested at Murphy Ranch the day after Pearl Harbor and his colony was scattered. Today the property is owned by the city of Los Angeles and is open for hikers and sightseers to appreciate the eerie landscape of decay.

Read above, or listen to learn about Murphy Ranch.