The small, hilly, and idyllic neighborhood of Echo Park is located just a few miles northwest of Downtown in Central Los Angeles. Originally part of an area known as Edendale, which also included nearby Los Feliz and Silver Lake, Echo Park became known as the epicenter for the early silent film industry in the 1910s. The era’s biggest stars, from Charlie Chaplin to Gloria Swanson to Fatty Arbuckle, worked in the studios in Edendale. Today, Echo Park is a vibrant mix of cultures, historic architecture, and engaged citizens that has retained its unique charm for over a century.

This Audio Tour is Narrated by Kurtwood Smith
(Bio) 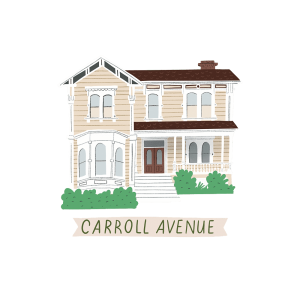 Carroll Avenue is in Angelino Heights, one of the oldest neighborhoods in Los Angeles, and is known for having one of the largest concentrations of Victorian homes remaining in Los Angeles. Be sure to stop by some our favorites: the Phillips House (at 1300), one of the most ornate homes on the street built in 1887 which blends two Victorian styles – the Eastlake style and the Queen Anne style; the Innes Home (at 1329), one of the original homes built on Carroll Avenue, which you might also recognize as the Charmed house from the popular TV series; the Sessions House (at 1330), which shows off Eastern influences including a Moorish-style tower, a large circular cutout representing the Chinese gateway to paradise, and a pair of carved bearded dogs guarding the entrance; the Haskins House (at 1344), the last Victorian to be built in the neighborhood in 1894 which features sunburst patterns, fish-scale shingles, and numerous spindles; and the Foy House (at 1337).

The Foy House was built in 1872 and is the oldest house in Angelino Heights – though it was originally built in downtown Los Angeles as part of El Pueblo de Los Ángeles, it was later moved to Carroll Avenue. The house was designed by one of the first practicing architects in Los Angeles, Ezra Kysor, who is also responsible for many other LA landmarks, including St. Vibiana’s Cathedral in Downtown. The Foy House is representative of the post-Civil War Italianate style, and at the time it was constructed it was the only three-story building in Los Angeles. The original owner’s daughter, Mary Foy, became the city’s first female Chief Librarian at the age of 18 in 1880. She later became known for her work as a civic and political activist, especially in the women’s suffrage movement.

Read above, or listen to learn about Carroll Avenue.
Next Stop: 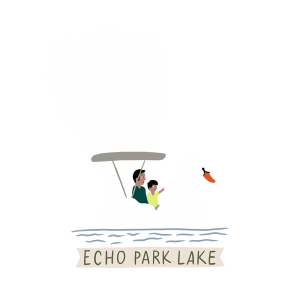 Originally built as Reservoir Number 4, Echo Park Lake was created to provide drinking water to the area in 1868. When it was built, the reservoir was the largest body of water within the LA city limit. The surrounding land was privately owned, but the city retained the rights to overflow the reservoir by up to 40 feet, which basically made the surrounding land worthless.

Then in 1891, the landowners and the city came to an agreement that the owners would donate 33-acres to the city so it could become a public park. In exchange, the city agreed to not overflow the area, making the nearby land that was owned by the same people more valuable – including what is present day Sunset Boulevard. Joseph Henry Tomlinson, the parks superintendent and architect for the Echo Park Lake project, reportedly chose the name after noticing that the lake had a natural echo.

In 2006, Echo Park Lake was identified as an impaired body of water. After a $45 million renovation, it was reopened in 2013. Though the park is temporarily closed with plans to reopen in the summer of 2021, we still wanted to highlight a few of our favorite spots to visit: be sure to check out the fountain in the middle of the lake with the stunning DTLA view behind it; stop by the Echo Park Boathouse, built in 1932 in the Spanish Colonial Revival style complete with an eight-sided lighthouse tower on one end; grab a friend and head out on the water in a swan boat for an afternoon adventure; enjoy the beautiful lotus flowers that bloom in the summer (some even credit Aimee Semple McPherson – see below – for bringing the flowers back from China and adding them to the lake); and visit the “Nuestra Reina de Los Angeles” (Queen of the Angels) statue commonly referred to as the “Lady of the Lake”, which was sculpted in the Art Deco style by artist Ada Mae Sharpless as part of the federal Works Progress Administration in 1934.

Read above, or listen to learn about Echo Park Lake.
Next Stop: 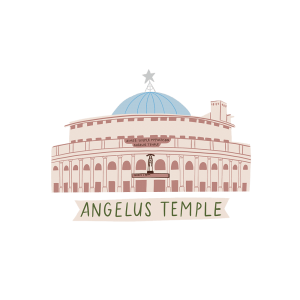 Completed in 1923, Angelus Temple was built by Aimee Semple McPherson. Born in 1890, McPherson (sometimes referred to as Sister Aimee) was an evangelist and media celebrity who was famous for founding the Foursquare Church. She built the megachurch by putting on theatrical church services, and used groundbreaking radio broadcasts to teach the scripture on her radio station, KFSG.

Following the dedication of Angelus Temple, McPherson had amassed such a large following that the building was filled three times a day, seven days a week. According to Church records, the Temple received over 40 million visitors within the first seven years of its existence. In 1927, McPherson opened a commissary at Angelus Temple offering food, clothing, and blankets, and she also created soup kitchens, free clinics, and other charitable activities during the Great Depression.

In 1926, McPherson disappeared from the beach in Santa Monica and was believed dead. However, about a month later she stumbled out of the desert in a Mexican town claiming to have been kidnapped and tortured. There was speculation that the kidnapping story wasn’t true, and that McPherson had either run away with a lover or disappeared as a publicity stunt. When she returned to LA she was greeted by an estimated 30,000-50,000 people. A grand jury trial could not determine whether the kidnapping story was true or not.

Following all of this, McPherson continued her ministry for many years. Unfortunately, she died of an accidental overdose in 1944. Over 45,000 people waited to see her body which lay in state for three days at the Temple. She was later buried at Forest Lawn Memorial Park Cemetery in nearby Glendale, CA. Today, Foursquare Church has over 8.8 million members in over 90,000 churches across 146 nations.

Read above, or listen to learn about Angelus Temple.
Next Stop:

We recommend trying one of their delicious, eye pleasing, boba-filled beverages. We also appreciate their pay it forward program that allows you to buy a drink for the medical and essential service providers that have been on the frontlines during this pandemic.

Read above, or listen to learn about Hey Hey Drinks.
Next Stop: 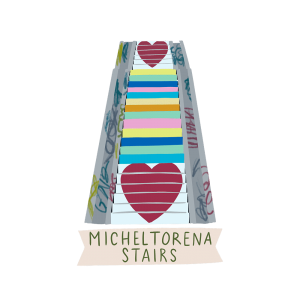 There are hundreds of “secret” staircases throughout Los Angeles, but the 205-step Micheltorena Stairs aren’t as hidden as others, and you should be able to spot them as you drive down Sunset Boulevard in Echo Park. They are known as the “world’s most Instagrammed stairway” probably thanks to the bright colors and hearts that were painted by artist Corinne Carrey in 2013.

If you aren’t tired after climbing the Micheltorena Stairs, you can also check out nearby Baxter Street Stairs (located at Baxter Street, three blocks east of Echo Park Avenue), which promises a great view of the DTLA skyline at the top of its towering 231 steps, or The Music Box Steps (at the intersection of Vendome and Del Monte Streets), which were made famous by Laurel and Hardy in their 1932 film The Music Box, which featured the comedy duo trying to carry a large piano up this staircase.

Read above, or listen to learn about Micheltorena Stairs.
Next Stop: Los Angeles is home to many works of folk art. In front of this Echo Park home, artist Randlett “Randy” King Lawrence, uses colorful glass bottles, wires, and colored water to refract the sunshine, creating a one-of-kind sculpture on his property which he calls Randyland.

The art installation called Phantasma Gloria consists of over 1,000 glass bottles in shades of red, cobalt blue, and aquamarine. You can admire the impressive Virgin de Guadalupe from the street as you drive by. For another of our favorite folk art homes in LA, check out the Farnam House on our 90403: Santa Monica Tour.

Read above, or listen to learn about Randyland.