Once part of the Mission San Fernando Rey de España, in 1869 a group of investors led by Isaac Lankershim, purchased this property to raise sheep. Soon after, Lankershim’s son and future son-in-law, James Boon Lankershim and Isaac Newton Van Nuys, took over management of the property, and under their leadership the area became one of the world’s largest wheat-growing empires. By 1903, the area was nicknamed “The Home of the Peach”, and by 1912 the area’s largest employer, the Bonner Fruit Company, was canning over a million tons of peaches and other fruits.

First known as Toluca and then Lankershim, the area officially became known as North Hollywood in 1927. Today, it is an eclectic, walkable neighborhood with dining, shopping, and numerous theater experiences along its streets. It was also Antaeus’s former home before we moved to Glendale in 2017.

This Audio Tour is Narrated by Dakin Matthews
(Bio) 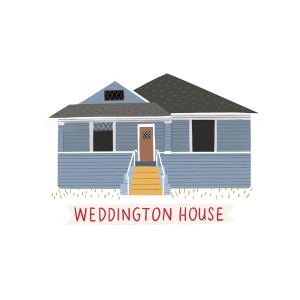 In 1886, Wilson Weddington moved his family to the area from Storm Lake, Iowa. The Weddington family went on to play a major role in the development of what is present day North Hollywood, Studio City, and Toluca Lake.

The Weddingtons helped bring the Southern Pacific Railroad to the area, which supported local farmers being able to ship their crops across the country. They petitioned the United States Post Office to recognize the Town of Toluca in 1892, and Wilson Weddington became the area’s first postmaster. The family also helped build the town’s first school, first fire station, and first bank.

After being relocated several times, the Weddington House eventually moved to its present day location. In 2006, the building was scheduled to be demolished, but one of the family’s descendants was able to get it designated as a landmark due to its historical significance. A developer purchased the property to build apartments, and as part of the overall project, they restored the house and turned it into a multi-purpose space for its residents.

Read above, or listen to learn about Weddington House.
Next Stop:

Coffee is an essential crew member here at Antaeus, fueling our daytime staff and helping our nighttime artists through late rehearsals. That’s why we’re thrilled to have a place like Moby’s Organic Coffee and Tea where we can get our caffeine fix! Moby’s is family owned and dedicated to sourcing local ingredients, as well as making their own specialty tea blends in house.

Read above, or listen to learn about Moby’s Organic Coffee & Tea.
Next Stop:

At Antaeus we have more than one crazy cat person on our team – perhaps that’s why we are such big fans of Iliad Bookshop! Not only can you find your new favorite book, but you may also meet one of their famous bookstore cats. Could you imagine anything better than knowledgeable staff members, cute kitties, and a hearty selection of books? We sure can’t!

Read above, or listen to learn about Iliad Bookshop.
Next Stop: 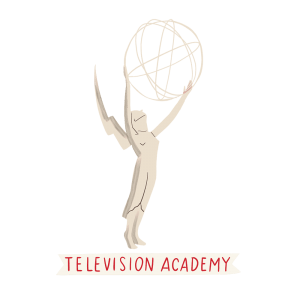 In 1948, the Academy members needed a design for the statuette that would be given to Emmy winners. After rejecting 47 options, they finally chose a winged woman designed by television engineer Louis McManus. Cassyd suggested naming the statuette “Ike,” the nickname for the television iconoscope tube, but others were concerned the name brought to mind Dwight Eisenhower. The term “Immy’ was suggested as an alternative – a term commonly used for the early image orthicon camera. The name stuck, but was later modified to Emmy, which members thought was more appropriate for the female statuette. The Hall of Fame Garden at the Television Academy includes a large-scale bronze replica of the Emmy statuette that weighs 1,750 lbs and stands 18-feet high. Be sure to check out the garden’s other statues, busts, and plaques honoring the Television Academy’s Hall of Fame honorees including Oprah Winfrey, Jack Benny, Lucille Ball, and others.

Read above, or listen to learn about Television Academy.
Next Stop:

City Kitchen Cafe has you covered by serving breakfast all day. We always love the opportunity to support local, independent restaurants like this one and we’re not gonna lie, we’re pretty excited about their bottomless mimosas that are offered EVERY. SINGLE. DAY.

Read above, or listen to learn about City Kitchen Cafe.
Next Stop: 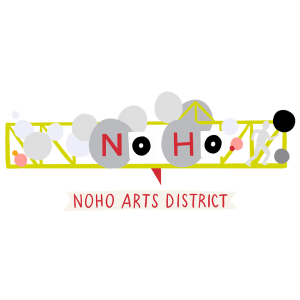 Head over to the NoHo Arts District Gateway sign to start your journey of the NoHo Arts District. Designed by artist Peter Shire, the Gateway sign is located at Lankershim Boulevard and Huston Street. Shire was one of the original members of the Memphis Group, a collective of artists that challenged the rigidity of modernist vocabulary and in turn used ephemeral designs featuring colorful and abstract decoration, as well as asymmetrical shapes.

Read above, or listen to learn about NoHo Arts District.
Next Stop: 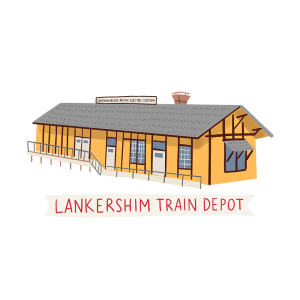 Located across the street from the Metro Train station is one of the oldest existing structures in the area. The Lankershim Train Depot was built in 1896 to connect the region’s agricultural industry to the ports.

From 1911 to 1952, this station served the Pacific Electric Red Car line. After undergoing a $3.6 million restoration project in 2014, the building was reopened in 2017 as the home to a coffee shop. The original one-story wood structure was kept intact and features the original yellow and brown exterior paint, as well as interior features that include wrought iron details, wood floors, and a barn-like ceiling.

Read above, or listen to learn about Lankershim Train Depot.
Next Stop: 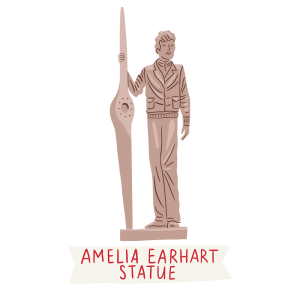 Paying tribute to Amelia Earhart is this statue of her likeness at the intersection of Tujunga Avenue and Magnolia Boulevard. In 1971, the 7-foot tall statue made of fiberglass and steel with a 23-karat gold overleaf was installed by sculptor Ernest Shelton. It received a $13,000 restoration in 1988 that re-covered it in gold, sealed cracks, and placed it on a new black marble pedestal.

Earhart moved to Toluca Lake in 1935, and often flew out of nearby Lockheed Air Terminal (now Hollywood Burbank Airport). She was the first woman to pilot a plane across the Atlantic Ocean, and the first woman to fly it alone. She helped found The Ninety-Nines, an organization that supports female pilots, which was named after the 99 (of 117) women pilots who attended the first meeting in 1929. Unfortunately, Earhart disappeared in 1937 over the Pacific Ocean when she attempted to become the first female to complete a circumnavigational flight around the globe.

Read above, or listen to learn about Amelia Earhart Statue.